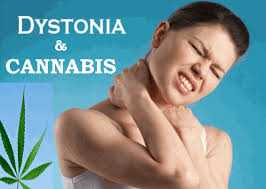 Many people  might be aware of medical canabis and its ability to offer symptom relief of major diseases like cancer, epilepsy and multiple sclerosis (MS) just to name a few. However, most of them are not aware of fat that medical marijuana can also work for the treatment of dystonia . as estimated number of close to 300,000 people in North America  suffer from dystonia  which interferes  with their  daily living. However, in many cases, the condition shortens the lifespan of a person and there is no known cure for dystonia as of yet. This disease is believed to originate from a part of your brain known as basal ganglia which consist of group of subcortical nuclei in the human  brain  responsible for monitoring  the speed of movement and controls undesired actions and equally sending signals  to the muscles instructing  them when to move and when to stop moving. Dystonia renders these basal ganglia instructions chaotic and irregular and causing unwanted muscle contractions and movements. This article looks at how marijuana can be used as treatment for these diseases

Dystonia is a movement disorder which causes involuntarily contraction of the muscles leading to repetitive movements and twisting, which can be painful at times. Scientific research has revealed that faulty brain signals causes muscles to pull on the body incorrectly, spasm and forcing the body to twist, move repetitively and form into an abnormal posture and these symptons are sometimes accompanied by dystonic tremors. There exist three groups of dystonia: Idiopathic dystonia which  occurs without an apparent cause, Genetic dystonia which genetically present at birth and Acquired dystonia, also known as secondary dystonia, which results  from either environmental or other forms of brain damage.

Some Possible causes of the condition include: Genetic inheritance, Carbon monoxide and lead poisoning, Physical trauma, Stroke, Infections. It should be noted that pharmaceutical drugs may also cause dystonia, particularly neuroleptics, which are often used to treat bipolar disorder and schizophrenia.

Some common symptoms of dystonia include may include:Tremors, Difficulty producing speech, Trembling within the diaphragm while breathing, Lack of sleep, Heightened anxiety and stress, Similar pain to restless leg syndrome.

It should be noted that the types of dystonias depend on the regions of the body they affect. Owing to the fact that so much of the disease entails muscle spasms and involuntary contractions medical marijuana, can be incredibly beneficial for treating involuntary muscle spasms. There have been several clinical tests suggesting CBD treatment as particularly beneficial for reducing dystonic movement disorders in humans

How and why medical Marijuana Is an Effective Treatment for Dystonia

Several clinical studies have revealed that medical marijuana for dystonia does improve symptoms. It should be noted that marijuana contains two main chemical compounds known as cannabinoids that activate the CB1 and CB2 receptors of your endocannabinoid system. These two chemical compounds are tetrahydrocannabinol (THC) and cannabidiol (CBD), which function in regulating the inhibitory and excitatory neurotransmitters necessary to diminish muscle tremors and spasticity.

A clinical study of a cannabis medication known as Sativex, in people who had spasticity symptoms due to MS showed that after four weeks of marijuana administration, the spasms traditional efforts didn’t work on were significantly reduced.

Another case study published by The Journal of Pain and Symptom Management in reported improved dystonia symptoms in a 42-year-old chronic pain patient whose subjective pain score, which was at a nine, fell to zero after she inhaled the cannabis smoke. The report also revealed that she also needed no additional analgesic drugs for the next 48 hours. The invested said that other types of conventional treatment that were administered failed to provide her with significant relief in her condition

What Symptoms of Dystonia Can cannabis effectively Treat?

Contorting muscles and repetitive spasms are often accompanied by neuropathic pain which can target any extremity, including the hands. They can equally result to disabling and painful dystonias in the shoulder, neck and facial areas, and prevent humans from being able to speak, move or walk if left untreated. However   although marijuana  for dystonia can’t cure the condition or reverse any side effects, science has revealed that  it can, in many cases, eliminate pain and cause the muscles to unclench and relax to the point where the patient Is not severely disabled anymore and may be able to function and move normally.

Research on CBD  a marijuana compound suggest that  it  helps to  relieve some muscle spasming associated with dystonia but doesn’t appear to help as much as it does when it’s combined with high levels of THC.

Cannabis for dystonia thus helps in easing symptoms of severe pain, nausea and appetite loss due to the antiemetic, analgesic and appetite-stimulating properties of marijuana. Marijuana also possesses antispasmodic properties that help in counteracting the involuntary movements accompanied by dystonia.

Dystonia not only  triggers  symptoms of insomnia, tremors and pain similar to restless leg syndrome but equally  secondary effects of the continuous brain and muscle activity such as ,blurred vision, Mental stress, Depression, Difficulty concentrating, Mood swings, Disrupted sleep patterns. It equally affects the overall well-being and ability of the body to function normally each day, which can result to stress and depression. Research on medical marijuana has revealed some cannabis and dystonia strains that can help with a number of symptoms. The ideal marijuana strains for each symptom are as follows: 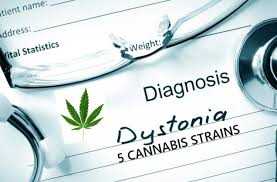 What is the take home message?

Other conventional treatments for Dystonia do exist but for some people, they may be enough while others may find these treatments not an effective relief, particularly for pain and muscle spasms, so many people have turned to cannabis. Research has proven that medical marijuana can help provide relief from Dystonia symptoms. All it takes is to consult a medical marijuana doctor or dispensary to prescribe the right strain for you and your medical marijuana quickly. Pain does not have mercy for anybody so you don’t want to waste any time finding relief. There can be ups and downs living with Dystonia, but living successfully with it is possible.

What to know about medical marijuana and multiple sclerosis

Best Ways to Enjoy Cannabis Without Having to Smoke It

Can You Eat marijuana? The essentials about cannabis Edibles

Cannabidiol as an Adjunctive Treatment for Schizophrenia